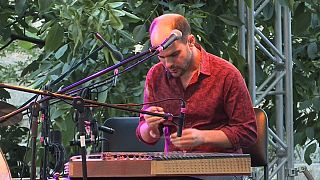 I don't think I'd be playing music today the way I do if it was not for the emotional turmoil, the pain that I feel inside, watching not only my country but the whole region

Euronews was there to meet Iraqi-American composer and trumpet player Amir ElSaffar after the concert he gave with his ‘Two Rivers Ensemble’, a project combining Middle Eastern sounds with Western contemporary jazz.

“Every time we perform, I feel like we discover new ways of letting these very distinct traditions combine and melt into one sound,” ElSaffar said.

“I play the santur, which is a very old Iraqi instrument that goes back to Babylonian times and Sumerian times. I also sing Iraqi Maqam, which is the traditional vocal style of Baghdad, Mosul and Kirkuk. It’s been practiced for centuries. And also with my trumpet I play Taqseem style, which is kind of an improvisation style that’s native to Middle Eastern traditional musics.”

Born near Chicago in 1977 to an Iraqi father and American mother, ElSaffar says he finds painful inspiration in the violent chaos that’s been gripping Iraq for over a decade.

“I don’t think I’d be playing music today the way I do if it was not for the emotional turmoil, the pain that I feel inside, watching not only my country but the whole region,” he said.

“I feel like it’s affecting me every day and I don’t know how to deal with it sometimes. But music provides a way for the emotions to be at least dealt with in a way that almost can be healing for me, and hopefully for audiences.”

Amir ElSaffar and his Two Rivers Ensemble are now on tour and releasing their third album, ‘Crisis’.