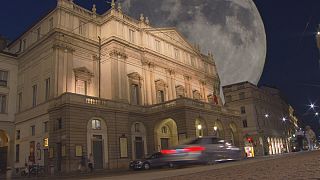 Rossini’s famous masterpiece “Othello” is returning to La Scala in Milan after 145 years. The opera, which premiered in 1816 to huge success in Naples was composed more than 70 years before Verdi’s version. Rossini’s “Othello” is only loosely based on the Shakespearean tragedy.

Juan Diego Flórez, who is performing the role of Rodrigo, was quick to show his admiration for Rossini.

“I adore Rossini. His music is like champagne, said the Peruvian tenor. “ He wrote for specific singers and we in a way have to get into their shoes.”

Flórez, who is considered to be the best Rossini tenor of his generation, added that his dream would be to journey back in time and meet the Italian composer in person.

Russian soprano Olga Peretyatko feels the same way about the composer, whose masterpieces make up a big part of her repertoire.

‘‘You have to be physically fit to be able to sing Rossini, explained Peretyatko. “His music is almost athletic. You need an enormous range, and be totally confident with those top notes and in the low and middle range. It needs to be both tender and strong. I’d say that if you can sing Rossini, you can sing anything.’‘

A love triangle, jealousy and a difficult father-daughter relationship are at the heart of the opera that marks a milestone in the development of Rossini’s dramatic style.

“You have to portray all the emotions within that coloratura, said Juan Diego Flórez. “You have to make them feel and believe that you’re despaired when you are saying: ‘Why you don’t love me. Why don’t you go with me. Why do you go with Otello?”

“Desdemona is not just a victim, added Peretyatko. “She made her choice and her choice was Othello. In the end she tells Othello: ‘My life no longer has any meaning so kill me”.