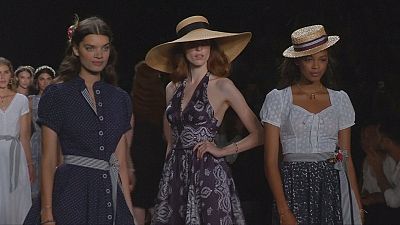 Lena Hosheck showed up at the Berlin Fashion Week with a fresh collection of work that demonstrates her passion for traditional handicraft and experimentation.

She explained her inspiration:“My inspiration comes mainly from different materials, colours and folkloric patterns, from a lot of traditional customs as well as different ethnic backgrounds, such as last year with Africa. This is a nice source of inspiration for a craft person.”

Hosheck has an enthusiasm for the movie stars of the 1940s and 50s as well as the cult of the pin-up girl.

After she studied fashion in Vienna followed by an eight month internship with designer Vivienne Westwood, she started her career as a designer at the age of 24 in Graz, Austria and founded her own label in 2005.

Her latest show looks to 19th century France:
“Several years ago, I discovered hand painted fabric from 1850 in Provence at a flea market. I had them reproduced at my graphic-design studio and made my own prints.”