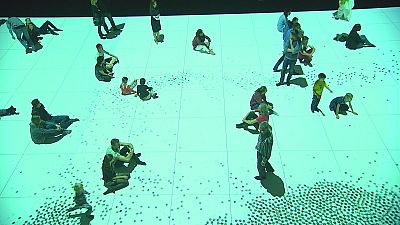 The near year-long GLOBALE art event celebrates art in the digital age. Organised in the south western Germany city of Karlsruhe, which is celebrating its 300th anniversary, it will run for 300 days.

It brings together art, science and technology and focuses on the socio-political impact of globalisation and digitalisation on our daily lives.

With modern machines and science, man influences his life and future, interrupting national evolution. In this context artists want to take a look at our modern society and ask questions. The event is organised by Karlsruhe’s Center for Art and Media, the ZKM.

“Media art is the peak of real art. Our machines reshape the world but artists also want to continue to participate in this. Oil paint is hardly up to the task; you might be able to paint nicely but you cannot keep up with the reconfiguration of the world done by technicians, politicians and engineers. And creation is an essential element for artists,” says the ZKM’s Director and Curator Peter Weibel.

GLOBALE’s opening weekend featured a tribunal organised to round-up the 20th century, a sort of trial. In the dock were its evils – war, genocides, displacements and annihilations, the atomic bomb and tens of millions of deaths. It was inspired by the Nüremberg trial and the Vietnam War Crimes Tribunal.

One installation called “Cloudscapes” allowed visitors to walk through or over artificially-produced clouds. Japanese architect Tetsuo Kondo joined energy engineers from Stuttgart to show the public how fragile a cloud can be.

“At the opening too many people destroyed the cloud, the crowd movement created turbulence that collapsed the cloud, so the lesson was we have to be much more careful with nature because in the end nature protects us and if we destroy nature it’s like committing suicide,” says Climate engineer Matthias Schuler.

Another Japanese artist and composer Ryoji Ikeda made a large- scale installation called micro / macro, developed during a period of research at the CERN, Europe’s nuclear research facility.

Mathematical and physical images are synchronized with sounds as well as the humming and droning of scientific equipment – visitors are in a kind in infosphere, completely surrounded by data via video or sound.

Over 40,000 people came for the opening ceremony in front of the city’s castle. Various art projects around the city take up the theme “The City is the Star”. The ZKM invited video installation artists from Hungary to use the castle walls as a screen. The Budapest team are masters of computer mapping technology.

“Everybody who does mapping has their own style. For us the most important thing is that we follow the music. The animation has to cooperate with it and we are try as hard as we can to fit the building’s architecture,” says Maxin10sity’s Creative Director Anrdás Sass.

One German artist centered his art work, “Tarzan/Standbein”, around the phenomena of perception. For two hours Berlin-based artist Johan Lorbeer seemed to defy physics, glued to a container four meters off the ground, with no visible support.

“I work with various performances which deal with the idea of gravity and anti-gravity. Just see the reaction of the people here – it’s still amazing for me to see how people react when you just change one parameter, I am a normal person but just not on the ground and just a little higher than normal and right away it becomes something spectacular,” he says.

One of the central exhibits in “The City is the Star” series is an dislocated house, a floating abode by Argentinian artist Leandro Ehrlich called “Pulled by the Roots”. This installation was inspired by the ongoing construction work in the city center.

“What has influenced my work the most is the fact that I grew up in a family of architects. What interests me is art in unusual places. I am interested in art in public places where people come together and talk about it and interpret it,” he says.

“GLOBALE combines art, science and technology in a fascinating way. Here you can see and experience how what we call “art” has changed and gone beyond its traditional boundaries,” says euronews’ Wolfgang Spindler.

GLOBALE runs in the Germany city of Karlsruhe until next April.