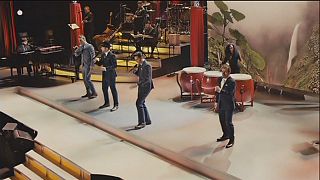 The Tenors are taking their signature operatic pop music on tour as they release their fourth studio album, ‘Under One Sky’.

The all-male quartet say they went through many songs before choosing the 13 tracks for their new album and the 17 songs for the deluxe version.

“There were more that we recorded and then there were hundreds more that we considered, and many that we demo-ed that didn’t make the final cut. But it was really hard and, I mean, that’s a good dilemma to have. There was so much good material between songs that we wrote for the album, I think we wrote about eight songs out of the ones that were chosen, for the final record,” says band member Fraser Walters.

The record includes covers of popular hits like Eric Clapton’s ‘Tears in Heaven’, ‘Lean On Me’ by Bill Withers and the Queen classic ‘Who Wants To Live Forever’, as well as the soaring original title track, ‘Under One Sky’.

The Canadian quartet will be touring North America from September, with gigs in both the United States and Canada.