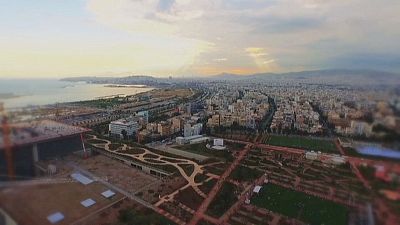 A bird’s eye’s view offers an idea of the scale of an astonishing new site currently under construction in Athens.

Designed by world-famous architect, Renzo Piano, the Stavros Niarchos Foundation Cultural Center is an arts, education and recreation complex scheduled to open in 2016.

This €566 million project will include a state-of-the-art National Opera, a new National Library and a 170,000-square-meter park.

“We made the building under the park,” explains Renzo Piano. “So we got two things: one, we are able to go up to enjoy the view of the sea and the second thing is that we have buildings that are very well protected against solar radiation, and therefore save energy. The other big thing is I am adding this roof, a flying roof, a flying element that is creating shadow and is also collecting energy.”

The park, which is already finished, temporarily opened its doors to the public last week to give visitors a taste of things to come, with a range of events reflecting the future program. More than 40.000 people turned up.

“I think this complex will bring light into our lives in this dark period. We will celebrate this as it deserves,” said singer Dimitra Galani.

“I am very, very impressed,” said a British tourist. “It is a breath of fresh air for Athens as many people here live in apartments, so they do need a green space. So I think this is absolutely amazing.”

Among the events on show was a photo exhibition by Vassilis Makris. Featuring dancers from the Greek National Opera against a backdrop of soil, wood and concrete, it chronicles the site’s evolution from its birth until today.

“This exhibition is about the soul inside the body – the body is the Stavros Niarchos Cultural Center. It is gradually beginning to have a pulse, to come to life,” said Maria Kousouni, principal dancer at the Greek National Opera.

“I am really very excited! I came for a short walk and it is a magnificent breath of life. You’re in touch with nature, with music,” exclaimed theatre director Katerina Evangelatos.

Wayne Escoffery and his New York quartet were among the bands performing at the opening event. With Greece currently experiencing the worst crisis in its modern-day history, Euronews asked him what art brings people in such times.

“All the greatest art was made during difficult times, you know. The music that I play, that I love – jazz – its most influential and inspirational time, musically, was the harshest time for United States, in the 50’s and the 60’s, during the civil rights era,” he said.

Another highlight was a video installation curated by influential US artist Robert Storr. Entitled ‘Fireflies in the Night’, it features non-stop screenings of some of the best video art produced around the world in the 20th and early 21st centuries.

“Over four days and nights, the Stavros Niarchos Park welcomed thousands of Athenians with more than 50 events – a rehearsal of what will be on offer daily in this cultural hub, when it opens officially to the public a year and a half from now,” said euronews correspondent Yorgos Mitropoulos.