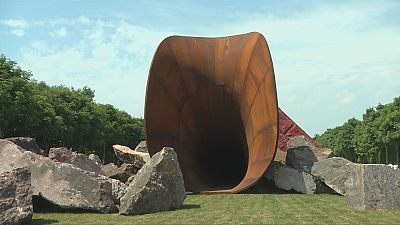 A series of six sculptures by the controversial British-Indian artist Anish Kapoor now complement the elegant landscape, or not, depending on taste.

Works such as ‘Sky Mirror’, ‘Dirty Corner’ and ‘C-Curve.’

The artist explains his motivation:“What I am doing here is taking the surface of Le Notre’s ordered garden, opening it and looking inside or attempting to look inside. Inevitably, inevitably I say one comes across the body, our bodies and a certain level of sexuality.”

The sight of such objects in such a grand setting is not everyone’s cup of tea.

As one US tourist explains:” When you think you’re coming to Versailles you’d expect like classic French, maybe a big statue of some Roman god but this just seems dirty.”

Bang on, it is called ‘Dirty Corner.’

‘Shooting into a Corner’ is created by the artist firing a canon of red blocks, which creates a blood curdling tapestry against a white wall backdrop.

Other works include the ‘Sectional Body Preparing for Monastic Singularity’ and ‘Descension.’

The show runs until the autumn.