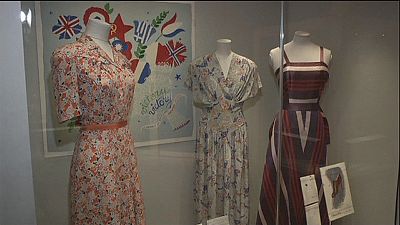 Seventy years ago, the people of Britain swarmed Buckingham Palace, the Mall and Trafalgar Square carrying British flags and jubilant smiles to celebrate the end of the war.

But hardship was not over as the country started to rebuild after the war.

First introduced at the start of the conflict, rationing affected everyday life, including clothing.

Necessity, the saying goes, is the mother of invention.

Now, the Imperial War Museum in London is looking at how fashion survived and even flourished under the strict rules of rationing in 1940’s Britain, often in new and unexpected ways.

“By 1941, the government takes the decision to introduce clothes rationing to a population which is already used to food rationing, for example. This now means that people cannot buy more than, roughly-speaking, one new outfit a year. It drastically reduces the choice that people have in terms of the new clothing that they can buy,” says curator Laura Clouting.

Government-backed schemes like ‘Make Do and Mend’ were introduced to encourage people to revive and repair worn-out clothes.

Creativity was also applied to cosmetics – women were encouraged not to let ‘standards’ slip amid concerns that a lack of interest in personal appearance could be a sign of low morale. Buttons, pockets and pleats were all limited, turn-ups were banned on men’s clothes. And accessories like jewelry, for example, were made with scraps of windscreen plastic from factories.

“I think what you see in wartime is a new trend which is very much determined by the war itself and that is for paired-down, simple styles which are very neat, kind of tidy-looking. And which of course endure today as that classic 1940’s look,” explains Laura Clouting.

While London crowds rejoiced, VE Day was in no way an end to hostilities or hardship.

War against Japan didn’t end until August 1945, clothes rationing continued until 1949 and food rationing until 1954.

‘Fashion on the ration’ runs at the Imperial War Museum in London until the end of August.