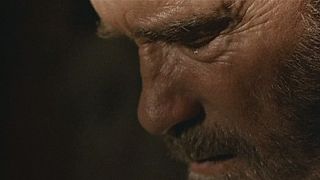 Famous for playing gun-wielding exterminators, action movie veteran Arnold Schwarzenegger stars in the new zombie film ‘Maggie’ in which he not only doesn’t kill anyone, but also plays a loving father, desperate to save his daughter from a mysterious disease.

“Everyone knows me for kicking ass on the screen and wiping out the enemy and all this,” says Schwarzenegger. “Here, I’m totally helpless. I’m totally vulnerable. I cannot wipe out this disease, the zombie virus. I cannot bring my daughter back. She is deteriorating and she’s on the way out and how do I deal with that?”

Abigail Breslin plays his teenage daughter who becomes infected with a disease that slowly turns people into cannibalistic zombies. Despite being advised otherwise, her father stays by her side.

“I think it’s without any doubt the most human role that I’ve ever played,” says Schwarzenegger. “And it happens to be the most human kind of zombie story, because usually we see the zombies walking around, you know, and people are killing them and mowing them down with machine guns and attacking them with all kinds of different weapons. And here you have a zombie inside your family. What do you do with that? I mean, you love your child, so you can’t go and kill her, so that’s what the dilemma is. So I think it’s a very human story.”

Described as the hobbling dead by one critic, the film has received very mixed reviews with others enthused by this “hugely promising debut feature”, which offers a moving twist on the (zombie) genre

Out in selected theatres in the US and Canada now, ‘Maggie’ is on worldwide release later this month.