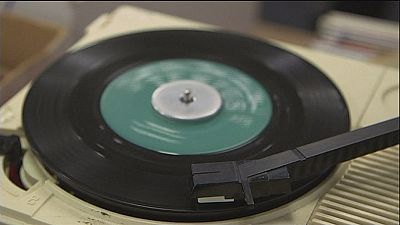 Soaring sales of the drastic plastic, or vinyl records, has led to the introduction of a weekly vinyl chart in the UK.

Vinyl technology dates back to the 19th Century, but came under threat from the digital age.

After succumbing to the march of time records are now very much back in vogue across the generations.

Harry Fisher is a serious collector: “Yes I’d say it is as popular with younger generations as it is with an older ‘rocker’ kind of generation and it’s definitely something that’s on the up and up. CDs are becoming a lot more irrelevant, but records are becoming more relevant still.”

They scratch, are bigger than CD’s but they inspire a tactile relationship as well as providing a unique sound.

As one young collector explained:“MP3’s have taken over. I just love something in my hands, it is a cliché, but its great, it is physical, you can relax, put it down, it is a moment, a special moment playing vinyl.”

In 2014 vinyl LP sales reached a 20-year high in the UK at 1.29 million, following seven years of unbroken growth, according to the chart company, which provides weekly rankings of British music sales.

The launch of the new chart coincides with International Record Store Day, which is a celebration of vinyl records and the dedication of the independent stores that kept the unique culture alive.