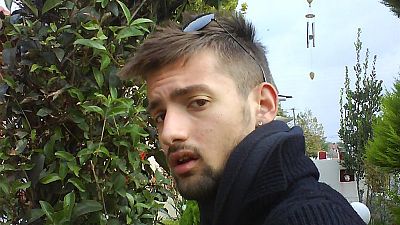 <p><a href="https://www.facebook.com/eurogeny" rel="external"><img src="https://static.euronews.com/articles/273814/600x78_blog-intro4.jpg"></a> <img src="https://static.euronews.com/articles/280760/600x135_Christos intro.jpg"></p> <p>Europe’s youth have been the worst affected by the euro-zone economic crisis. In Greece <a href="http://www.tradingeconomics.com/greece/youth-unemployment-rate">youth unemployment rose to 51.2 percent in 2014</a>, resulting in bleak career prospects for young Greeks.</p> <p>Rafael Stavros Ioannou is a 23-year-old Theology student, at the Aristotle University of Thessaloniki. He lives with his family in Adendro, a small village near Thessaloniki, Greece’s second largest city.</p> <p>He explains how difficult being a young man in Greece is right now. “You feel isolated; it is nearly impossible to find any kind of job. Especially a job in the field of your studies,” he says. </p> <p>Rafael feels that there are no prospects for him in his country. He is hopeful, like many others of his age, that other European countries can offer him better job and career opportunities. </p> <p>Apart from the economic crisis, Rafael thinks that Greece’s educational system is “rotten to the core,” contributing to the lack of opportunities. His reason being the lack of effort and reforms to create a sufficient and functioning system: “I believe that the educational system is something that governments never take too seriously,” he describes. Rafael thinks that funds are absorbed by other ministries, leaving education inadequately financed to be fully functioning and current. </p> <p>To proceed with necessary reforms, you need funds. To modernise a country’s educational system, the government needs to invest in it and, in addition, plan extensively. When the government focuses on saving the banks or other financial institutions, education becomes outdated. As a result, the country’s youth do not have access to modules that will offer them immediate career prospects, in an increasingly competitive European market.</p> <p>“Being a student in Greece feels like permanently not being able to see light at the end of a tunnel,” describes Rafael. “You study for years, yet you are aware that you will never find a job in your field,” he continues. </p> <p>In addition to the dysfunctional educational system in Greece, young Greeks have to face new overwhelming challenges. “The financial crisis has ruined my dreams, my family’s, as well as those of millions of other people in this country,” Rafael says. He is worried about the time when he will have to finish his studies and find employment. </p> <p>He believes that bad decisions were made in the choice of the elected representatives in many countries, resulting in a system that favours the interests of a few. “The EU is created to benefit certain countries and nothing more,” he states.</p> <p>As things stand right now, it is true that certain elites, in certain elite nations have taken control of the whole European continent, leading to inequality. That creates a sentiment of being second class EU citizens among much of Greece’s youth. “I don’t feel a European citizen while living in Greece, since I only experience the negative effects of the EU creation,” describes Rafael. </p> <p>Explaining further, he adds that he has no knowledge of his rights as a European citizen. The only benefit that he is aware of is the ease of working in another member state. Doesn’t this manifest a huge failure in Greece’s, but also many other EU states’ educational systems?</p> <p>So how do young people cope, while having such a negative outlook on their future? “In a country like Greece you feel stifled from everyday life and reality. You must have hobbies to forget your problems and keep positive,” explains Rafael. He plays unprofessional football with his local team and also loves music, especially hip-hop. Rafael composes and sings his own lyrics, inspired by personal life experiences, aspirations and dreams. </p> <p>Sadly there are very few opportunities out there for him to turn his hobbies into a career. “At least not without any connections,” he adds. </p> <p>Despite all of this, Rafael has still many hopes and ambitions. Some of them include travelling the world, meeting people and getting to know other cultures. </p> <p>On a more professional level, he would like to see employment opportunities for Europe’s young people, “so they can live according their dreams,” he explains. </p> <p>“I would like to attain my degree in theology and after that, hopefully to live my life without the current financial boundaries,” Rafael describes. He finally wishes to see a European Union in which every country is equal, offering the same opportunities for jobs and development to all of its young people; Greece being one of them.</p> <p><b>Do you agree with Christos and Rafael? Are you from Greece and have a different exprience? Let us know on <a href="https://www.facebook.com/eurogeny">Facebook</a>, <a href="https://twitter.com/eurogen_y">Twitter</a> or <a href="https://plus.google.com/+eurogeny" rel="external">Google+</a></b></p> <p><strong>Also to read from Christos Mouzeviris:</strong><br /> <a href="http://www.euronews.com/2015/03/18/why-europe-is-in-need-of-educational-reforms/"><h4>Why Europe is in need of educational reforms</h4><img src="https://static.euronews.com/articles/302966/606x341_picture of apple.jpg"></a></p>