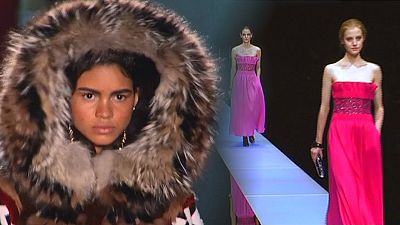 Milan Women’s Fashion Week has drawn to a close with Dsquared2 presenting their new collection for the upcoming Autumn-Winter season.

Dean and Dan Caten, the extravagant Canadian twins behind the label, drew their inspiration from native Indian patterns.

‘‘We are going back, way back, to Canada, early days, very early days,” said Dean Caten backstage.
“The early heritage of Canada, like an Eskimo meets a British aristocratic,” said his brother, Dan. “So it’s kind of a mash up between two worlds, so it’s very tribal, very ethnic, very early Canadian Indians meeting royalty.”

In a clash of cultures, the looks were an eclectic fusion of Native American dress mixed with European colonial-era attire.

Dresses with delicate drapes evoked Victorian undergarments and geometric motifs with an indigenous flair gave a twist to maxi ponchos.

The designer, who turns 81 this year, sent models down the catwalk in graceful tailored trouser suits in light wool. Armani’s look was one of muted elegance in hues of blues, greys, and metallics with the occasional bright burst of colour.

Printed silk was used for trousers as well as light blouses and long fringed scarves. Accessories included removable collars which adorned both suits and dresses. Evening dresses were sequinned and long, with standout black panels running down from hip to hem.

As Milan Fashion Week comes to a close, all eyes are now on Paris for the next major event on the fashion calendar.