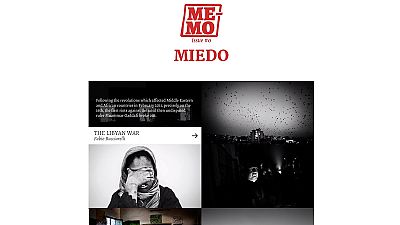 On the shores of the Ourcq Canal in one of Paris’ trendy neighbourhoods a group of award-winning photographers have got together to launch an innovative online magazine.

Valle is currently developing a long-term project about stateless nations around the world. He says the idea is to create a new space for photojournalism: “For us, Me-mo is a way of moving forward, of trying out a new formula. We don’t claim to have created the best model of photojournalism. Rather, it’s a bet, we are saying, well, let’s try to open up a new path. And we’ll see where it will take us.”

Fabio Bucciarelli has spent the last few years working on major events in places like Libya, Syria, South Sudan and Mali. He talks about the risks of working as a war photographer: “Documenting conflict has always been dangerous, ever since the days of Robert Capa.

“What has changed is the role of journalists in war zones. In recent years, both regular armies and militias have realised the importance of journalism and photography in war zones. So not only are reporters no longer protected, but we have even become targets,” he says.

Manu Brabo is a Pulitzer-prize winning photojournalist whose work focuses mainly on social conflict around the world. He has covered political uprisings and war in countries like Haiti, Egypt, Syria and Libya, where he was kidnapped in 2011. He is currently working on the conflict in Ukraine. Asked whether he would describe it as a civil war, he answers:

“Given the scale of events in Ukraine, I think you can call it a civil war. The big difference with other wars that I’ve covered, is that in this case, I was there before it became a war. This has allowed me to see the crisis unfold. Ever since the events in Crimea, I had figured out where things were going… where the bullets would fly.”

Just a stone’s throw away from the Canal de l’Ourcq is ‘Bar 61’, founded by Rémy Ourdan, a former war reporter for Le Monde, well known for his coverage of the siege of Sarajevo. His bar regularly hosts photo exhibitions, film screenings and book launches, and is the ideal place to launch the new magazine.

Complete independence, both financial and editorial. No advertising. Those are the ambitions of Me-Mo Magazine, which focusses exclusively on long-term projects shot over several years. The overall idea is for technology to serve the narrative and the stories.

Designed as an application for tablet support only, Me-Mo was born from a crowdfunding project. Well exceeding the 15,000 euros needed, donations reached 20,000 euros.

For their first edition, its creators have chosen to focus on the theme of fear.

Rémy Ourdan is delighted to be welcome them in his café for its launch: “Me-Mo Magazine is both a truly successful photojournalism magazine project but it’s also proof of the vitality of photojournalism – here at ‘61’ we often host photo exhibitions.”

With their project now launched in Barcelona, London and Paris, the five photographers are now ready to go back to war and bring the world more exceptional coverage of events unfolding around the world.