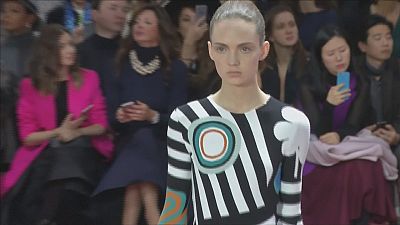 An impressive two-storey circular runway covered in dusty pink carpeting and surrounded by industrial piping gave guests the impression of going back in time to a lavish Seventies sci-fi flick.

The choice of music underlined the point.

“The way I see David Bowie is the way I see this collection, not necessarily aesthetically but as a kind of concept, because I wanted to go back in time like the last couture show. But I wanted to see if I could bring three decades together that sit in a row: the Fifties, the Sixties and the Seventies,” said Raf Simons.

And the Giambattista Valli show in Paris was all about rock meets chic.

Although both women are synonymous with women’s liberation, only the Italian designer could combine Coco Chanel’s Parisian flawless elegance with Janis Joplin’s American irreverence.

Mademoiselle Coco’s timeless style was instantly recognizable from the polka dots to the tutu skirts and the monochrome silhouettes.

Dots of colour were added to dresses with embroidered flower petals in soft pink or yellow until colour took over completely in an explosion of pink hues.