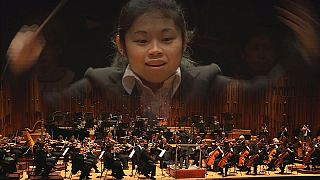 To become and, above all, to grow as a conductor is a privilege only a happy few get to enjoy. That is why, in 1990, Donatella Flick founded a conducting competition in partnership with the London Symphony Orchestra. The prize is 12 month’s work with the acclaimed LSO.

This is a very tough world where no-one will buy you coffee unless they expect something back from you. It's changed so much in the last five to ten years... I strongly believe patronage is a duty, especially today. It's extremely important, and there's not enough of it.

From a field of 200 candidates, a talented trio – one of them a young woman – made it to the final.

Her presence was encouraging for Flick: “It’s very difficult to find female conductors. I don’t know why but this is an increasingly masculine job. Women do approach it, but the path is very long. I believe it’s a job where great mental and physical strength is required… the heart too… your brain and soul together, but above all you need physical energy.”

28 year-old Elim Chan, a British citizen born in Hong Kong and now studying in the United States, emerged as the winner.

She said winning the prize would help her fulfill her dream: “Becoming a conductor – I just had this idea when I was really young, when I saw the conductor go on stage, working all these wonders, I [thought]: I want to be up there!”

“[While I was looking] at the musicians, and the music was happening, it was so unbelievable because it’s almost like it’s not me there and it’s not them there, it’s just the music, and once I looked in their eyes everything was connected…”

Describing the role of the conductor, Chan said: “It’s like a lens, like a glass, [but] you cannot shine on your own, you need the light, something to shine through you… [and] that’s the music from the musicians, and the passion! Then it goes out there for the audience, and goes back to the musicians, too, and for myself!”

Donatella Flick is a 21st century patron of the arts. Despite her fairy-tale life, this descendant of a noble Ossetian family is under no illusions about how difficult a conductor’s life can be: “This is a very tough world, where no-one will buy you coffee unless they expect something back from you. It’s changed so much in the last five-ten years… I strongly believe patronage is a duty, especially today. It’s extremely important, and there’s not enough of it,” she told euronews.