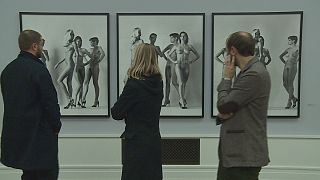 More than 200 works by legendary photographer Helmut Newton, including some never seen before in the German capital, are on display in Berlin.

They are part of hundreds of photos donated to his eponymous foundation by Newton himself before his death a decade ago.

Divided into three main categories – portrait, nudes and fashion – the show also includes a number of original prints authenticated by Newton himself.

“These 500 works are still here in the building, of course, but it is the first time that we did a selection of these works – 200 works now which you find on the walls – and this selection represents all of his main topics: portrait photography, fashion photography and of course nude photography,” says the curator of the Helmut Newton Foundation, Matthias Harder.

The famous Big Nudes shot by Newton in the 1980s and nineties include fashion shots mainly commissioned by magazines such as Vogue.

A successful photographer in her own right, his widow June Newton runs the Helmut Newton Foundation.

“He was not a portrait photographer, he was a fashion photographer. He was a gun for hire. Publicity, that sort of thing. He made his living at photography. So the big nudes came later. All that nudity that he is known for, that was very late in his life,” she said at the show’s opening.

The foundation also houses a permanent collection, Helmut Newton’s Private Property, which displays exhibition posters, cameras and other objects that belonged to the famous photographer, and screen films about his work.

'Permanent Loan Selection' runs at Berlin’s Museum of Photography until May.