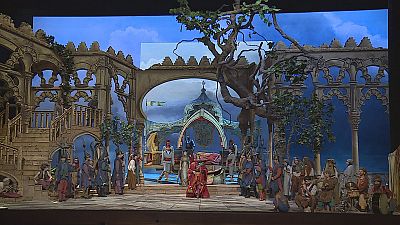 The Paris Opera, an architectural gem of the second half of the 19th century, provided a perfect venue recently for Mozart's "Abduction from the Seraglio".

Set in an imaginary Orient, the opera is inspired by the ideals of the Age of Enlightenment and is a celebration of fidelity, tolerance, and clemency. The stage director is the eclectic Zabou Breitman, whose innovative stagecraft includes the use of silent films to launch the performance.

“Musically, the overture is a sort of summary of what is to follow,” Breitman says. “But as this is a story where what happened before is important, I liked the idea of the audience knowing it from the beginning, and that’s conveyed immediately in the silent films of the Twenties. So I wanted to use that device, which also helped evoke that atmosphere immediately.”

Breitman believes Mozart’s work affords almost limitless possibilities to the stage director: “Mozart can get away with anything! Everything is possible with him – and I love that! Under his apparent lightness, there’s a sort of bitterness, nostalgia.

“The arias, they all bring tears to my eyes. Of course, as this is an opera, we know that everything is true and not true at the same time. It’s Chaplin’s ‘City Lights’… it’s life’s absolute and terrible mockery and nothing is fun if we lose the certainty that even death has its ridiculous side.”

“One thing I really love is the quartet – it’s like the whole opera in miniature, as if the singers were singing over the model of the show. Every single feeling is contained in the quartet, and the artists are like puppets repeating it all over again. It’s like looking through the window in a painting.”

Breitman says he couldn’t hope for a better team of artists:

“Each time they sing, my favourite character changes… I tell myself: ‘It’s her! No, it’s him! No, that’s too good!’ In fact, as soon as they start singing, I change my mind. Really, I just love them! And I’m so incredibly lucky to work with such amazing artists, I really am!”