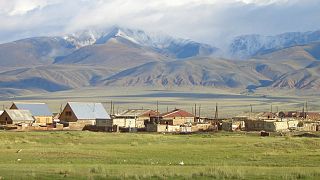 What do you know about Siberia? How do you imagine it?

“Taiga, wild nature, small town and villages… something like that” – Nastasya, 23, Moscow, Russia

“All I can imagine is an extremely cold place with people wearing warm clothes and drinking vodka.” – Arcângela 25, Rio de Janeiro, Brazil

“Huge mountains with trees all covered with snow and dark shades of stones on the ground instead of grass or land. Cottages made of wood. Tall, handsome guys.” – Paula, 26, Poços de Caldas, Brazil

Despite the fact that almost everyone has heard something about Siberia, we barely know anything about this mysterious area. So I couldn’t miss a chance to talk about this frozen land with my friend, who was born and raised in Novosibirsk, the unofficial ‘capital’ of Siberia.

Hello Gosha! Which stereotypes about Siberia are the most common across the world?

That we all have a beard to our knees, Gulag (labour camps), bears and vodka. Well, what can I say? We do drink vodka in Siberia, but not from our birth and not three times a day. Labour camps still exist, but they are not as severe as once described by Solzhenitsyn. There are bears in Siberia’s forests, but they do not walk on the streets and don’t dance with balalaikas.

How would you describe the character of a Siberian?

Someone who always keeps his word.

Currently you live in France for your studies. What is the main difference between people in France and Siberia, from your personal experience?

It seems to me that in France it’s much harder to establish contacts: once you meet French people they are very polite and nice with you, but in a very formal way. In Siberia it’s the opposite: people seeing you for the first time will hardly show happiness on their faces, however, if you like each other, it will be very easy to become real friends.

What is the general opinion of European countries in Siberia?

Honestly, we hardly think about other European countries as we are more attached to Asia. The only exception, I guess, is Germany. The thing is that over the 19th century relatives of German prisoners were sent to Siberia, where they had to build their new lives. For example, in the Altai region there are many German towns and villages. In Siberia we call them, “people who lost their homeland”. In Germany they are considered Russians and in Siberia as German.

How do people treat foreigners in Siberia? Is there much prejudice?

In general we are really friendly with foreigners, the only thing that matters is a respect towards our culture and traditions. Your skin color doesn’t make any difference, as Siberia is the homeland of more than 40 different ethnicities, so the concept of racism here almost doesn’t exist. It’s curious, but I can’t say the same thing about Moscow.

How would you describe Siberian cuisine?

Honestly saying, there is no such thing as Siberian cuisine. However, we have the cuisine of minorities: generally they eat different types of meat, like lamb, venison, camel, elk, bear and even beaver! The last two are incredibly delicious, I should mention!

How would you describe Taiga?

Taiga is boundless forest, which has its own life and its own rules, and it might be really dangerous for people who are not familiar with them. Once you step into Taiga you are surrounded by a cloud of midges, and trust me, it doesn’t seem lovely at all. I know of situations, when – in several hours – mosquitoes sucked all the blood out of an elk which got stuck with its horns between trees.

Once my friends and I were about to sleep next to the river in Taiga when we heard a roaring bear from the other side of the river. Seriously, that was scary! I felt paralyzed and at the same time I wanted to run without looking back. You know, to see a bear in the zoo and to hear him outside, being so close to you… wow, these are completely different things!

Novosibirsk is a big city, so we have a bit of everything: both modern and soviet buildings, old churches, small cafes and fancy clubs.

How do young people spend their free time?

Well, everything depends on the weather (the temperature can be from +30 Celsius in summer to -42 in winter).

During winter (if it’s not too cold) we enjoy skiing, skating, snowboarding and playing hockey. During summer time my friends and I adore exploring Siberia. For instance, last year we visited the Altai Mountains. That was awesome, and you know, after spending two weeks far away from civilization you feel very relaxed and you start to see the world around you differently. I would definitely suggest everyone has this incredible experience.

Is it true that in Siberia you prefer vodka to other alcoholic beverages?

I would say that older people prefer vodka to other alcohol, but the younger generation doesn’t really drink pure vodka. Sometimes we can mix it with juices or lemonades, but generally we drink whiskey, brandy or beer. By the way, when we drink at someone’s place, the entire group sleeps over. We say that “a drunk person has nothing to do in the cold”, as you can easily freeze to death.

And the last question: would you like to live in Siberia or would you consider staying in Europe?

It’s great to have some experience abroad, but I love Siberia too much and I will definitely go back. That is my homeland, I understand this style of life and this way of thinking. So no doubt, Siberia.

how people view me after i say i'm russian pic.twitter.com/7lbY5VClZU