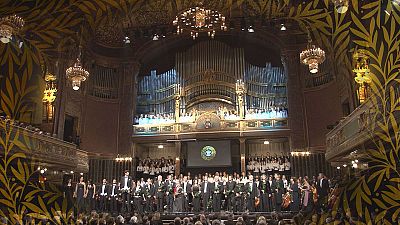 Budapest’s Liszt Academy has recently reopened its doors after a major and successful renovation.

Whilst enhancing its prestigious musical past this Hungarian institution, both a music university and a concert hall, is ambitiously projecting itself towards the future and reinventing its image.

“The building is beyond definition, the abundance in motifs and ornaments makes it unique, and the extent of their significance is still to be completely revealed. From these treasures from the past we are trying to project a modern brand,” says Imre Szabó Stein, Head of Communications.

The Academy, which was founded by Liszt in 1875, moved to the present wonderful Art Nouveau building in 1907. Some of the greatest Hungarian musicians were trained here and top 20th century artists have performed in its breathtaking concert hall.

András Batta is the Academy’s President. “Many musicians came here, big Russian artists, Richter, Rostropovich, they loved the hall, its special atmosphere. Through that, artists and the audience can get closer because the shape of the hall is like a bell, the artist is the clapper, and it’s as if the audience echoed this kind of ‘bell’, “ he says.

Some of today’s greatest Hungarian musicians performed at the reopening gala from pianist Bogányi to violinists Katalin Kokas and Barnabás Kelemen who also teach at the Academy.

“This is the temple of music, this is a shrine. And I always feel the same happiness when I enter this building, this is my alma mater. I was educated here from the age of 12: everything I have, I got it here, and it’s what I can offer my students,” explains Katalin Kokas.

“I’d like to say that my grandfather was one of the most influential gipsy orchestra leaders in the ’30s. I only knew him from old black and white films. My mother hardly remembers him because he died young, but blood is thicker than water…that’s why I really like playing gipsy music,” adds Barnabás Kelemen.

At the gala they played a few violin duos by Béla Bartók, a composer who somehow contributed to make Barnabás and Katalin a couple also in real life.

“At seventeen we got together thanks to the Bartók duos, and at that moment we realised we were made one for the other. We didn’t know at that time what the other thought about music, we just realised it was perfect harmony, and the differences we had integrated with each other,” she says.