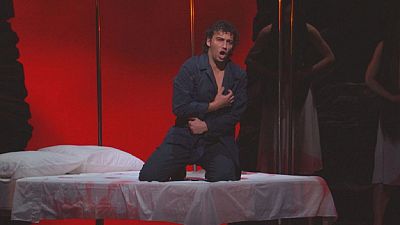 “Parsifal” by Richard Wagner has triumphed recently at the Met in New York. The charismatic presence of the main interpreter, German tenor Jonas Kaufmann, played a major role in its success.

Wagner’s last opera revolves around the saga of the Holy Grail. It tells a complex story where philosophical, ethical and religious elements are ingeniously intertwined. A mystical drama, it tells us of Parsifal, ‘the innocent hero of pure heart’ who at the end of his journey will save the knights of the Holy Grail.

“If you start to dive into all those layers of this fantastic piece you catch fire, it’s something amazing and unique, like a transcendent journey, a very mysterious experience,” said Jonas Kaufamann.

At the last two shows Israeli Asher Fisch was on the rostrum; conducting Wagner, he told us, it is like doing yoga: self-control is everything. “In Parsifal you have to accept that the inner rhythm of the piece comes from complete tranquillity. It’s like trying to lower your pulse and your blood pressure to make this music speak in the right language, and it is a very difficult process,” he explained. For tenor Jonas Kaufmann his role has led him to consider how we can mover forward in the world.

“It’s a very philosophical experience, and it really makes you think about the failure of humankind, and what would happen if Man followed this idea that the Fool, ‘he who does not know anything will ultimately be enlightened through the mercy and pity he feels for the others’ – if we went with that there would be no war, only peace everywhere.

‘I had people telling me that this opera makes you understand again why you are a Christian, and they were saying that in the audience the person next to them turned round saying ‘it makes me actually very jealous, I wish I were a Christian like you’!”

Yet ironically conductor Asher Fischer contends Wagner was not a religious person.

But it is not Wagner’s beliefs which Jonas Kaufmann says leaves the audience with a memorable experience.

“After one, maybe after two hours, everybody gives in, and starts really to listen and focus more and more, and is drawn by Wagner’s music into this piece. It takes a while to do that, but if it happens it’s unique, it’s something you will never forget.”