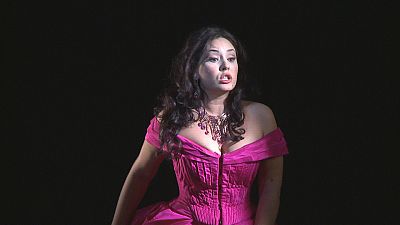 It is one of the most popular operas in the world. More than 150 years after its premiere, Giuseppe Verdi’s masterpiece La Traviata still leaves both audiences and performers deeply moved.

“A few months ago, while I was in Paris, I was given the book La Dame aux Camelias,” she tells euronews. “She lived in appalling poverty, had a very strict father. She left home at the age of 13 and I was fascinated by her courage: she just packed her belongings – maybe she didn’t even have any – and went in search of a better life, future and identity. It reminded me of myself, when I left Bulgaria at 19 with just two suitcases and a little money in my pocket in search of my own.”

“Violetta is a ‘fallen woman’, that is what Traviata means, someone who strayed from the right path, she’s a prostitute. One day she’s given a chance to leave her status as a kept woman, and become an ordinary, ‘acceptable’ woman, who loves and is loved. But, eventually, she will be denied this,” he says.

Conductor Marco Armiliato sees his role as providing the right conditions to get the very best out of the singers:

“I adore singers because I love voices,” he says. “A singer’s instrument is very delicate, that’s a fact, and you have to (…) provide them with a sort of wonderful ‘cushion’ they can lean on to make the best use possible of this beautiful voice,” he says.

“I think that, in a way, you need three actrices to perform La Traviata, in order to see the three different sides of Violetta: the one who says at the party: ‘hey, I’m dying, but what the hell, I’ll keep on living and I will survive!’. The second is the Violetta who comes to terms with Alfredo’s family and a society that rejects her, that’s Act II and the showdown with Alfredo’s father. And the third is when Violetta is dying: she’s so weak but she has the guts to cry out: ‘why on earth?’. So you really have to be able to play those three different versions of Violetta.”

For more excerpts of our interviews with Jean-Louis Grinda and Sonya Yoncheva (in French) please click on the following link: