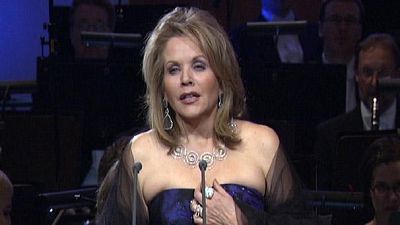 The American soprano Renée Fleming, one of today’s finest opera singers, has been described as the ‘People’s Diva.’ But it was not easy at the start though, at least vocally, as she told us before performing in Helsinki.

“My voice was challenging to find because I had so many technical issues. And I developed a sort of love of performing much later – I was not a natural performer.”

“I heard some early recordings recently and I was surprised at just how undistinguished I sounded in my twenties. So I think that my voice took a little bit longer to develop, and I know that my technique took longer to develop along with my ability to say something on stage – I was a bit of a ‘late bloomer’, I’d say.”

Renée Fleming’s voice has an element of nostalgia and longing that she says comes from a mixture of influences.

“It’s a combination of two musical sensibilities that I have. One stems from my jazz background, because there’s a freedom that I’ve taken from that which I apply to how I turn a phrase,” she said.

“And the second part of that is this concept of ‘tragen,’ to carry. It’s how you stretch and pull a phrase so that you bring the ear along with it, and that is the thing I think more than anything else that creates the concept of longing in music.”

“I’m a person who is completely dependant on the reaction from the audience. When I don’t feel something coming from the audience I have learnt not to be immediately depressed, because I have discovered that there are some audiences who are serious listeners and not necessarily the most demonstrative in terms of showing their appreciation until the very end. With experience I have become a little less vulnerable to that.”

In this edition of Musica you can hear excerpts from the following Giacomo Puccini works: ‘Donde lieta uscì’ from La Bohème, and ‘O mio babbino caro’ from Gianni Schicchi.