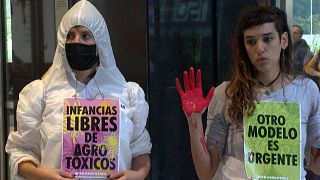 Environmental activists from the Extinction Rebellion group staged a protest on Friday in front of the offices of the agrochemical company Monsanto in Buenos Aires.

The protesters said the company's practices were damaging the environment and contributing to climate change.

Argentina has undergone a remarkable transformation since 1996, when Monsanto commercialised a new model promising higher crop yields and reduced pesticide use through its patented seeds and chemicals.

Today, all of Argentina's soybeans and almost all of its corn, wheat and cotton are genetically modified.

For decades, doctors have warned that the uncontrolled use of pesticides could be causing increasing health problems among the 12 million people who live in the vast agricultural belt of this South American country.

In the province of Santa Fe, the heart of Argentina's soy industry, cancer rates are two to four times higher than the national average.