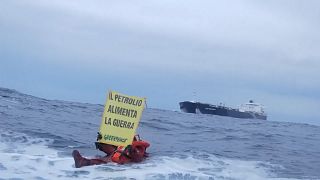 Activists from Greenpeace Italy wrote the message "Peace, not oil" in large letters, on the side of a Russian crude oil tanker, as part of efforts to urge European governments to stop using fossil fuels.

The crude oil tanker has a Liberian flag but is owned by Russian shipping company Sovcomflot (SCF).

Greenpeace said that the SCF Baltica sailed on April 1 from Primorsk, Russia, carrying about 110-thousand tons of crude oil to the Rada di Santa Panagia, near Syracuse.

The environmental activists said they want to highlight the link between fossil fuels and conflicts, like the war in Ukraine.

Greenpeace estimates that since the beginning of the conflict in Ukraine, EU countries have spent more than 33 billion euros (35.6 billion US dollars) to import gas, oil and coal from Russia.