The head of the Russian army has hinted at a shift in strategy, saying the war effort will now focus on eastern Ukraine.

US President Joe Biden has visited eastern Poland to see US troops and the humanitarian response to the influx of Ukrainian refugees.

There's some hope for those in the besieged Ukrainian city of Mariupol after France's president announced an evacuation plan. Earlier authorities said they feared up to 300 people were killed in the Russian theatre bombing on March 16.

See a summary of Friday's developments in our blog below:

France, Turkey and Greece will carry out "a humanitarian operation" to evacuate people "in the next few days" from the besieged city of Mariupol, in southern Ukraine, French President Emmanuel Macron announced on Friday.

"We are going in conjunction with Turkey and Greece to launch a humanitarian operation to evacuate all those who wish to leave Mariupol," he said after a European summit in Brussels.

"I will have within 48 to 72 hours a new discussion with the President Vladimir Putin to properly settle the details and secure the terms," ​​said Macron. “I hope to be able to engage as many stakeholders as possible in this operation.”

The French president said that his office had communicated on Friday with the mayor of Mariupol, “a city of more than 400,000 inhabitants which today only has 150,000” living "in terrible situations".

More than 2,000 civilians have been killed in Mariupol, the local authority has said. According to Ukrainian President Volodymyr Zelenskyy, some 100,000 people are still stranded in this strategic port on the Azov Sea which is besieged by Russian troops.

European Commission President Ursula von der Leyen and Council President Charles Michel have been speaking at the end of their summit in Brussels.

Von der Leyen said four packages of sanctions imposed by the EU on Russia over its invasion of Ukraine were "biting hard", adding that all efforts should now be on enforcing them and preventing "circumvention and evasion".

Von der Leyen thanked Ukraine's neighbouring countries for taking in millions of refugees and pledged a package of €17 billion to help those countries cope with the influx.

Meanwhile the EU is providing €2.5 billion until 2024 to help the regions most affected by food insecurity, von der Leyen said, as the war began to take its toll on food supply in Ukraine and globally.

Ukraine and Russia together account for one third of the world's wheat exports.

US President Joe Biden said earlier during a visit to Poland that the US and Canada would be helping to close the gap left by that impacted production.

Doing business with Russia: Big brands find it's not so easy to pull out

Many Western companies have stopped their Russian operations to comply with sanctions, but some very recognisable brands are still doing business there - so what's the deal? 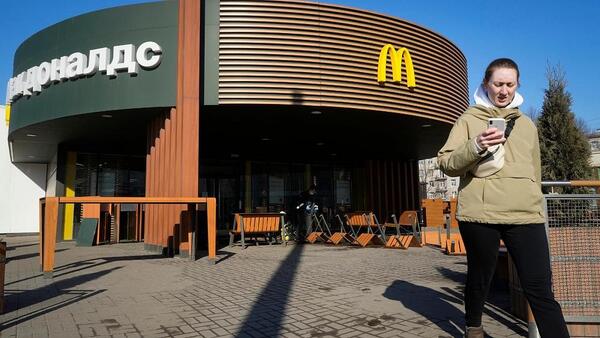 JK Rowling is pushing back after Vladimir Putin dragged her into a rant against Western efforts to "cancel'' Russian culture.

"Critiques of Western cancel culture are possibly not best made by those currently slaughtering civilians for the crime of resistance, or who jail and poison their critics," the Harry Potter author said Friday in a tweet linked to an article about jailed Putin critic Alexei Navalny.

Putin earlier compared recent Western criticism of Russia with efforts to "cancel" Rowling over her views on transgender issues. Rowling has been criticized after saying she supported transgender rights but did not believe in "erasing" the concept of biological sex.

"The notorious cancel culture has become a cancellation of culture. Tchaikovsky, Shostakovich, Rachmaninov are excluded from concert posters, and Russian writers and their books are also banned,'' he said at a videoconference meeting with culture figures.

"The last time such a mass campaign to destroy unwelcome literature was carried out by the Nazis in Germany almost 90 years ago." (AP)

"The Russians fired six cruise missiles. Some were shot down by anti-aircraft defences. The others hit several buildings, causing significant damage," the air force command announced on Telegram.

The statement, accompanied by a photo showing the gutted part of a brick building, added that the consequences of the strike were being evaluated.

Ukraine's air force and air defences have so far resisted attempts by the Russian military to control the Ukrainian skies, with the Pentagon praising their skill.

Russia's defence ministry says its strategy will focus on completely "liberating" eastern Ukraine's Donbas region, following the first phase of its military operation in Ukraine which it says is mostly complete.

The defence ministry said Russian-backed separatists now controlled 93% of Ukraine's Luhansk region and 54% of the Donetsk region - the two areas that jointly make up the Donbas.

"The main objectives of the first stage of the operation have generally been accomplished," Sergei Rudskoi, head of the Russian General Staff's Main Operational Directorate, said.

"The combat potential of the Armed Forces of Ukraine has been considerably reduced, which ... makes it possible to focus our core efforts on achieving the main goal, the liberation of Donbas."

The announcement has been interpreted as a possible move to more limited goals after Putin's forces ran into fierce Ukrainian resistance in the first month of the war. But Defence Ministry spokesman Igor Konashenkov said the "special military operation" would continue "until all objectives are achieved".

Rudskoi also described as a "big mistake" the delivery of arms to Kyiv by Western countries. "It prolongs the conflict, increases the number of victims and will have no influence on the outcome of the operation," he declared.

(with Reuters and AFP)

Pope Francis on Friday condemned the "vicious war" against "our defenceless Ukrainian brothers and sisters", during a ceremony dedicated to Ukraine and Russia at the Vatican.

"In these days, (...) bombs are destroying the homes of many of our defenceless Ukrainian brothers and sisters," said the Argentine pontiff during a religious service at St Peter's Basilica.

About 2,000 faithful gathered in S. Peter's Square to follow the ceremony on giant screens, according to the Holy See's press service.

In recent weeks, the Pope - who has spoken with Ukrainian President Volodymyr Zelenskyy but also with the Orthodox Patriarch of Moscow Kirill - has multiplied calls for peace in Ukraine, denouncing a "massacre" in this country where "flow of rivers of tears and blood".

The Russian ambassador to Paris was summoned to the French Foreign Ministry on Friday after the publication of cartoons on its Twitter account deemed "unacceptable" by the French government.

"These publications are unacceptable. We made that clear today to the Russian ambassador" Alexey Meshkov, the ministry said.

One of the drawings showed Europeans on their knees licking Uncle Sam's buttocks, bearing the words in English "European solidarity as it is".

The tweets, which appeared on Thursday, have since been removed.

"The Russian ambassador drew the attention of his French vis-а-vis to provocations and instances of vandalism with regards to Russian diplomatic missions," the Russian embassy said, as reported by the TASS news agency.

What are other developments on the ground in Ukraine?

What else is happening in the EU and the West?

What is the latest that Western leaders saying about the conflict?

What else is Russia saying about the war?

How many refugees have fled Ukraine?

In the month since the war began, more than 3.6 million people have fled the war in Ukraine. Most of them have fled to neighbouring Poland, which has taken in over two million refugees.

Millions of Ukrainians are also internally displaced within the country as heavy fighting and shelling forces people to flee several cities.

More than half of Ukraine's child population is displaced, according to the UN Children's Fund, UNICEF, which called it a "grim milestone".

Read more about the conflict