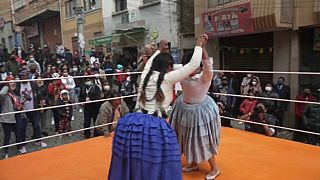 A young woman climbs into the ring. "Maria, Maria, Maria!" several men shout, and no one knows whether they came to the party or were paid to cheer on the fight.

Her opponent's name is Anabel; they are both cholitas luchadoras, part of a group of Indigenous women who fight wearing traditional clothes.

The referee, in a black and white striped shirt, gives the go-ahead: the fight begins.

Maria throws herself at Anabel. Their skirts bounce with each fall and the two exchange punches in what looks like a choreography in which the referee takes part.

However, they claim that the fight is real.

"It means power, more than anything else, because before there was discrimination against the cholitas luchadoras, but now there is not so much," she says.

The terms "cholo", "chola" and "cholita" refer to the original population. Although they are still used with contempt in some contexts, they have gradually lost the pejorative charge they had since colonial times and are now just another word.