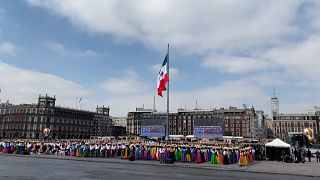 Mexico celebrated the anniversary of the 1910 Revolution on Saturday in a mass parade, with a tribute to the armed forces for taking on a broader role in public life.

Zócalo Square was the starting point for a parade that brought to life different representations of Mexican history.

The parade was watched by large crowds.

The parade featured more than 6,000 Mexican soldiers, along with some 2,000 horses. Cavalry from Argentina, Italy and Ecuador also took part.

The Mexican Revolution was a period of political, social and military turmoil that started 111 years ago as a rebellion against dictatorship.