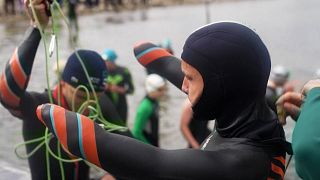 Alongside his two companions, Olympic medalist Malia Metella, 39, and Matthieu Witvoet, 27, Curin set off at 8:15 am from Copacabana on the Bolivian side of Lake Titicaca, some 3,800 meters above sea level.

The French trio, who will take turns to swim while the other two rest and keep warm in a boat made from recycled materials sailing alongside, hope to finish the challenge in 10 days, when they arrive in Puno, Peru.

During the journey they will drink filtered water from the lake and keep their food in reusable bags to avoid producing any rubbish.

Before they began, they received the blessing of a local Amauta -- a wise person from the Aymara indigenous community -- who showered them with white petals and gave an offering to Cota Mama (mother water) to protect them.

Curin finished fourth at the Rio 2016 Paralympics in the 200-meters freestyle, and is a two-time world silver medalist.

Metella won 50-meter freestyle silver at the Athens 2004 Games, while Witvoet describes himself as an eco-adventurer.

Around a dozen top level Bolivian swimmers set off alongside them for the first few kilometers.