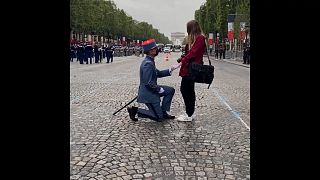 As marching troops marked Bastille Day in Paris, a cadet from the Land Corps kneeled to propose in front of the spectating crowd.

Cadet Maximilian and his unnamed partner took a minute to enjoy the public moment in Champs Elysee while the crowd and other troopers cheered for them.

The proposal took place as Bastille Day recovered its colour after the celebration was scaled back last year.

At the Paris parade, the number of onlookers was limited.

Each person attending had to show a special pass proving they had been fully vaccinated, had recently recovered from the virus or had a negative virus test.

Similar restrictions were in place for those watching an elaborate fireworks show at the Eiffel Tower on Wednesday evening.

Spectators converged on Paris from around France, glad to be able to see the parade in person even if it was frustrating with the restrictions and long lines for virus security checks.