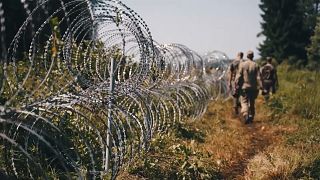 Members of Lithuania's border guard have begun installing a barbed wire fence on the Lithuanian side of the border with Belarus, according to footage released by the Lithuanian State Border Guard Service.

Lithuania began Friday to erect a fence along its border with Belarus to deter third country migrants from entering, a week after Vilnius declared a state of emergency to address a sharp rise in migratory flows - which it says Belarusian authorities are encouraging.

Relations between the two neighbours are tense following the August 2020 elections in Belarus, which were won by long-time President Alexander Lukashenko but have been widely condemned by the West as rigged.