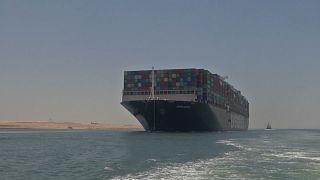 Suez Canal authorities announced Wednesday the release of a hulking shipping vessel that blocked the crucial east-west waterway for nearly a week earlier this year.

The Ever Given was seen leaving the Suez Canal after its Japanese owner, Shoei Kisen Kaisha Ltd., reached a compensation agreement with the canal authorities after more than three months of negotiations and a court standoff.

The settlement deal was signed in a ceremony Wednesday in the Suez Canal city of Ismailia, after which the vessel was seen sailing to the Mediterranean.