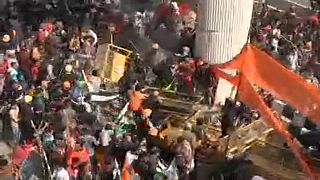 Thousands of Indian farmers, many aboard tractors, broke through police barricades to begin a protest march into New Delhi on Tuesday as the government held its main Republic Day military parade.

Police imposed one of their biggest security operations in years to stop the protesters, who oppose agricultural reforms they say will decimate their livelihoods.

Authorities in the Indian capital had agreed to allow tens of thousands of farmers to stage a tractor rally as long as they waited for the military parade to end.

However, flag-waving farmers on at least three major roads overcame security and pushed into the city. Police, who erected barricades of containers and trucks, fired tear gas towards at least two groups.