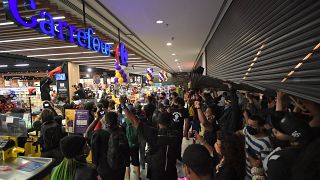 Demonstrators across several Brazilian cities protested the death of a Black man who died after being beaten by supermarket security guards in the city of Porto Alegre, on the eve of Friday's Black Consciousness Day observations.

The protests were sparked by videos showing Joao Alberto Silveira Freitas being beaten by guards outside a Carrefour supermarket.

Black Consciousness Day is observed as a holiday in many parts of Brazil.

In Rio de Janeiro, a group of people participated in a celebration on Friday with Afro-Brazilian dance and music in the working-class Santa Marta favela.

"November 20 helps us shake our society and bring to black people the necessary tools for them to challenge this Brazilian structural racism," said Itamar Silva, 64, who has lived most of his life in the Santa Marta favela.

Black and mixed-race people account for about half of Brazil's population but constitute 74 per cent of victims of lethal violence, according to the Brazilian Forum on Public Safety, a non-governmental organisation.

The percentage is even higher for those killed by police at 79 per cent.