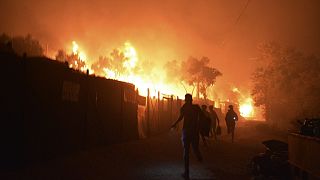 Migrants and refugees were evacuated from a large migrant camp on the Greek island of Lesbos on Wednesday after fires broke out at multiple points around the site, fire service officials said.

Some 12,500 people live at the Moria camp and the surrounding area, where additional restrictions have been imposed over the past week after a Somali resident tested positive for COVID-19.

The fires broke out overnight, officials on the island told the Associated Press, adding that the cause of the blazes remained unclear.

Officials did not confirm local reports that the fires had been set deliberately in protest at lockdown measures but said firefighters had 'met resistance' from some camp residents.