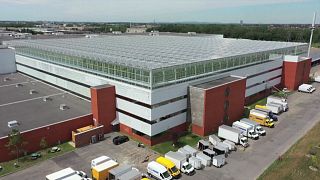 This is the world's largest rooftop greenhouse, which has opened in Montreal to meet the growing demand for locally sourced foods.

It's not an obvious choice of location to cultivate organic vegetables -- in the heart of Canada's second-largest city -- but Lufa Farms on Wednesday inaugurated the facility that spans 15,000 square metres or about the size of three football fields.

"The company's mission is to grow food where people live and in a sustainable way," spokesman Thibault Sorret told AFP, as he showed off its first harvest of giant aubergines.

It is the fourth rooftop greenhouse the company has erected in the city. The first, erected in 2011, broke new ground.

Since then, competitors picked up and ran with the novel idea, including American Gotham Greens, which constructed eight greenhouses on roofs in New York, Chicago and Denver, and French Urban Nature, which is planning one in Paris in 2022.

A local Montreal supermarket has also offered since 2017 an assortment of vegetables grown on its roof, which was "greened" in order to cut greenhouse gas emissions linked to climate change.