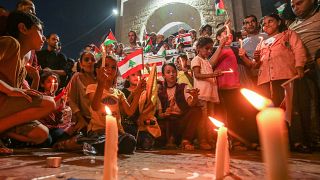 The Lebanese flag was beamed onto Tel Aviv's city hall in a gesture of solidarity with Beirut after Tuesday's devastating explosion.

Ron Huldai, the city's mayor, tweeted that "humanity takes precedence over every conflict and our hearts are with the Lebanese people following the horrible disaster that befell it".

Israel and Lebanon are officially in a state of war and do not have diplomatic relations. Israel fought a monthlong war in 2006 against the Lebanese militant group Hezbollah, and the sides remain bitter enemies.

The gesture by city authorities in Tel Aviv sparked controversy within Israel. Some current and former lawmakers criticised the decision to project the Lebanese flag onto city hall. But many residents applauded the move.

Vigils for the victims of the blast were also held in the Palestinian Territories, Tehran, Paris and London.