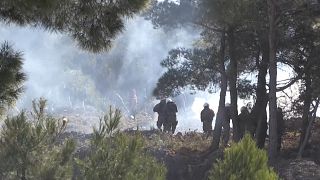 Hundreds of protesters on the Greek island of Lesbos on Wednesday threw stones at police who responded with tear gas, stun grenades and rubber bullets on a second day of demonstrations against the construction of new migrant camps.

"You're going to die here," one protester shouted at police, as others screamed obscenities at them.

Ten protesters and dozens of police officers were lightly injured in the daylong clashes in Mantamados, a village near a construction site for a camp to house 7,000 migrants, a police source said.

"We are in a wartime situation," local priest Father Stratis told AFP. "(The police) have the weapons, we have our heart and soul."

A general strike was observed on Lesbos, Chios and Samos -- the islands with the largest migrant populations -- as Prime Minister Kyriakos Mitsotakis called for calm amid mounting criticism from the opposition.

Some 2,000 people demonstrated on Chios, where a group later broke into a hotel where riot police are staying, injuring eight of them, a police spokesman told AFP.

After weeks of fruitless talks with island officials on where to build the new facilities, the government on Monday secretly shipped construction machinery and hundreds of riot police to Lesbos and Chios, causing outrage.