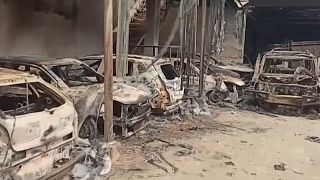 This is the burned remains of cars in New Delhi after violence between Hindu mobs and Muslims protesting a new citizenship law.

The legislation fast tracks naturalisation for foreign-born religious minorities of all major faiths in South Asia except Islam.

At least 20 people have been killed and 189 injured in three days of clashes in New Delhi, which coincided with US President Donald Trump's first state visit to India, authorities said Wednesday.

New Delhi's top elected official, Chief Minister Arjind Kerjiwal, called on the government of Prime Minister Narendra Modi to send the Indian army to areas in a northeastern corner of the sprawling capital affected by the riots.