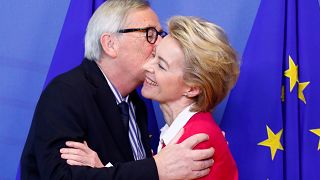 Former head of the European Commission Jean-Claude Juncker officially handed over his function to Ursula von der Leyen during a ceremony on Tuesday.

A portrait of Juncker was unveiled next to the other former presidents.

Giving a short speech afterwards, a joking Juncker expressed his gratitude for the years in service and also had some advice for von der Leyen, wishing her "great ears" to interpret the whispering in Brussels, the members states and the European Parliament.

He then symbolically gave her a ceremonial bell but said it was "absolutely useless".

Von der Leyen, as the head of the EU executive, will be in charge of trade negotiations, and economic and climate policy for 500 million Europeans and antitrust rulings.

Her five-year Commission, which began on Sunday December 1, is composed of the College of Commissioners from 27 EU countries.

Together, the 27 Members of the College are the Commission's political leadership.

They are assigned responsibility for specific policy areas by the President.