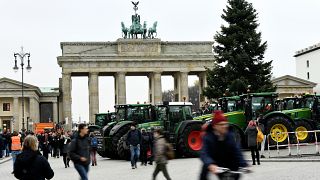 Tractors gathered at Berlin's Brandenburg Gate as thousands of farmers protested against the government's agricultural policies.

Farmers claim that the new environmental limits that are planned are too restrictive and that the government is making it impossible for national agriculture to compete against imports, among other things.

Tractors gathered at the historic Brandenburg Gate, in the heart of the capital, blocking large areas of the city with slow-moving convoys along the way with a plan to cause more disruptions when leaving at rush hour.