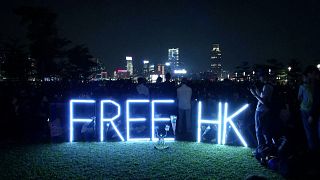 Vigil in Hong Kong after death of student protester

Hong Kong protesters held a vigil for "martyrs" on Saturday (November 9) after a student died in hospital this week following a high fall, fueling anger among pro-democracy demonstrators who first took to the streets in June.

Thousands gathered in Tamar Park next to central government offices in the former British colony that returned to Chinese rule in 1997, after they had secured rare permission from the police to hold the evening rally.

The protesters sang hymns and carried flowers, while many shouted "revenge," a call heard increasingly often at rallies and given added impetus since a student died in hospital on Friday after falling from multi-story park during a protest.

Chow Tsz-lok, 22, a student at Hong Kong's University of Science and Technology (UST), fell on Monday as protesters were being dispersed by police.

Rallies have often erupted into clashes between police and protesters, creating the worst political crisis in the territory for decades, although Saturday's vigil that drew students, older people and a few children was quiet in the early evening.

Students and young people have been at the forefront of the hundreds of thousands who have taken to the streets to seek greater democracy, among other demands, and rally against perceived Chinese meddling in the Asian financial hub.