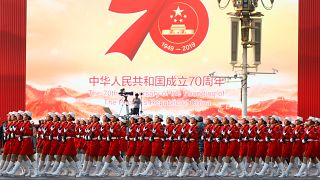 China put on a show to celebrate the 70th anniversary of the Chinese Communist Party's rule.

It featured singing, dancing and fireworks. Earlier, there was goose-stepping troops, gaudy floats and nuclear-capable missiles in a huge military parade in Beijing.

Tuesday marks 70 years since Mao Zedong proclaimed the founding of the People's Republic of China from Tiananmen Square on October 1, 1949.