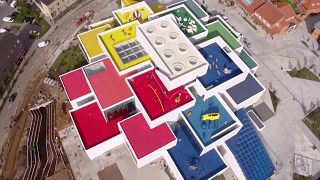 Fifteen of the world's most talented Lego builders have been invited to the home of the Lego brick - the Lego House in Billund in Denmark - to exhibit their creations.

Around 700,000 adult Lego fans worldwide go by the name AFOL - Adult Fans of Lego - and 15 lucky Lego builders from Asia, Europe and North America are now getting the chance to exhibit their imaginative creations at the Lego House.

The winners were chosen because they challenged the perception of what they built from Lego bricks - a typewriter, a coral reef and a human head, for example.

Senior Designer at LEGO House, Stuart Harris, who led the selection, said it was "incredible" to meet the AFOLs and to see what they could do with Lego.

The exhibitors had to transport their fragile models to Billund.

The exhibition will be open to the public from Friday (September 27).