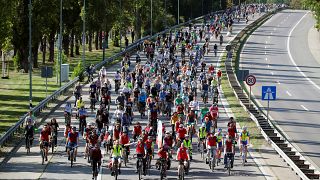 As Frankfurt's motor show opens its doors to the public, thousands of protesters demonstrated to demand action on climate change.

Some highways temporarily closed for a cycling rally which descended on the city to join other protesters.

The protest organisers want climate-neutral transport by 2035 and stronger German climate change policies. They also have decried a move towards larger SUVs.

The protesters say they will continue their rally on Sunday and aim to demonstrate on the grounds of the motor show.

Organisers said there were about 25,000 demonstrators made up of cyclists and pedestrians in the afternoon.