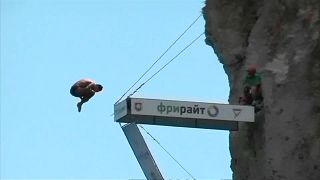 Hundreds of spectators on boats and on the beach cheered and applauded while the "Freerate Cliff Diving World Cup" participants flipped in the air and landed in the sea.

"It's always difficult to perform, it's scary to jump off this 27-metre platform, but with the crowd, with the competition - that's what makes it possible for us," said Hunt.

Hunt is also leading the Cliff Diving World Series, having won all four events in 2019 so far.

The event took place near the Crimean town of Yalta. Russia annexed the Black Sea peninsula from Ukraine in March 2014, but Ukraine and many major international powers consider the peninsula to be part of Ukraine.