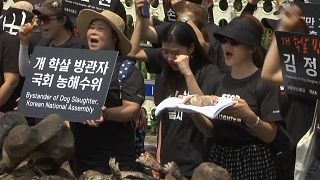 The two groups were separated by a bastion of police officers.

About a hundred protesters attended the protest outside the National Assembly Building, laying flowers in front of dead dog replicas. Basinger and dog lovers urged parliament to revise the amended animal protection law which allows the slaughtering of dogs for food.

Meanwhile, South Korean dog farmers and members of the Korean Dog Meat Association held a pro-dog meat rally. Separated by police officers, these protesters ate dog meat as part of Chobok celebrations; a Korean festival celebrating one of the hottest days of the lunar calendar year where dog meat consumption is a tradition.

Consumption of dog meat is on the decline in South Korea. It is mainly eaten by older people as dogs are becoming increasingly popular as pets.