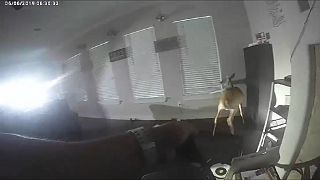 Police stormed into a US house expecting the noise intruder to be a burglar.

Instead, they found a deer.

Bodycam footage shows the officers trying to guide the animal outside as the burglar alarm goes off in the background.

It happened in Lufkin, Texas, around 6.10am local time on Thursday.

Officers had found a smashed window and what sounded like an intruder moving around inside, according to

"The homeowner heard glass break and immediately hid in a closet," read a post on Lufkin Police & Fire's Facebook page.

"An officer arrived on scene to find a front window shattered. He then heard someone moving around inside the home and called for backup.

"Several officers arrived and formed an entry team. Upon making entry through the broken window, the lead officer rounded a corner and came face to face with one very frightened doe.

"After several minutes of “deer wrangling” with kitchen chairs, officers shooed the doe out the front door."