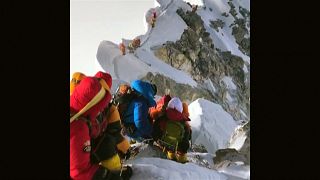 Tendi Sherpa filmed the video on Thursday, May 23, showing the Mountaineers at the Hillary Pass, which is an almost vertical rock formation below the peak.

Some of the recent deaths, such as that of the British mountaineer, Robert Fisher, 44, were attributed to the long lines that climbers must make to reach the summit.

Fisher died after he weakened too much to descend into the so-called "death zone," known for low oxygen levels in descent from the top.

Mount Everest can also be climbed from Tibet and casualties have also been reported on that route.