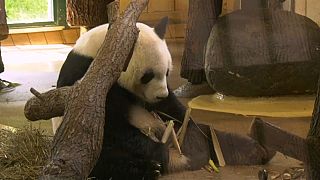 Giant panda Yuan Yuan was officially handed over from China to Vienna's Schoenbrunn zoo on Monday (May 20) in a ceremony attended by top Austrian and Chinese officials.

It was the first time that the panda was seen by visitors since he was brought to Vienna from China a month earlier. He replaces Long Hui, another giant panda which died in 2016, leaving behind his partner, Yang Yang.

Schonbrunn has been one of the few zoos in the world where giant pandas live and is known for its successful breeding programme, according to the zoo's website.

Yang Yang and Long Hui had offspring four times since arriving in 2003, which is rare among captive pandas.