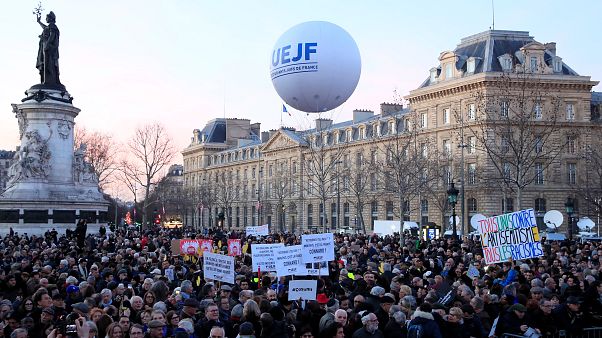 President Emmanuel Macron paid his respects at a Jewish cemetery in Eastern France where the graves had been vandalized with swastikas.

96 graves in the village of Quatzenheim near Strasbourg were affected.

President Macron vowed to crack down on hate crimes amid a recent spate of anti-Semitic acts in the country.

The visit came ahead of nationwide rallies which condemned anti-Jewish hate crimes.

"We shall act, we shall pass laws, we shall punish," Macron told Jewish leaders.

"Those who did this are not worthy of the Republic," he added.

He placed a white rose on a tombstone commemorating Jews deported to Germany during World War II.